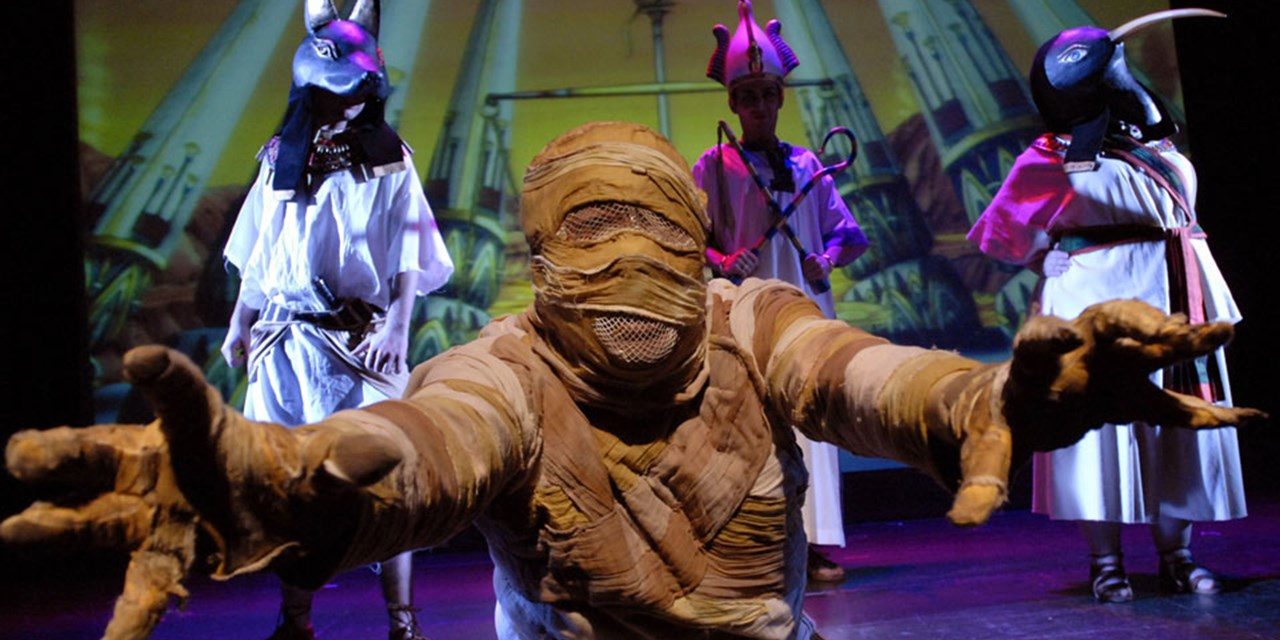 In Terrible Tudors take a trip through the horrible Henries to the end of evil Elizabeth and hear the legend (and the lies!) about the torturing Tudors. Find out the fate of Henry’s headless wives and his punch up with the Pope. Meet Bloody Mary and see Ed fall dead in his bed. Survive the Spanish Armada as it sails into the audience!

Awful Egyptians invites you to meet the fascinating Pharaohs, gasp at the power of the pyramids and discover the foul facts of death and decay with the meanest mummies in Egypt. Are you ready to rumble with Ramesses the Great? Dare you enter through the Gates of the Afterlife? It’s the history of Egypt with the nasty bits left in!

A special feature of the productions are the amazing 3D effects called Bogglevision! Among an array of 3D illusions the audience will see the Spanish Armada firing cannonballs into the auditorium or the Mummy reaching out to grab them!

Horrible Histories Live on Stage is directed by Neal Foster, design is by Jackie Trousdale, lighting by Jason Taylor, sound by Nick Sagar and music by Matthew Scott.

Birmingham Stage Company are also currently celebrating their 25th anniversary and are one of the world’s top theatre companies for families. Their acclaimed productions include David Walliams’ Gangsta Granny and Awful Auntie and Roald Dahl’s George’s Marvellous Medicine. They have been producing Horrible Histories Live on Stage since 2005, including the record-breaking West End series of Barmy Britain.

These two hilarious historical journeys through the squelchiest and yuckiest moments in British and Egyptian history are perfect entertainment for anyone aged from 5 to 105!

Tickets available from the Box Office on High Street West, via the ticket centre 0844 871 3022* or www.ATGtickets.com/Sunderland*calls cost up to 7p per minute plus standard network charges. Booking and transaction fees may apply to telephone and online bookings.