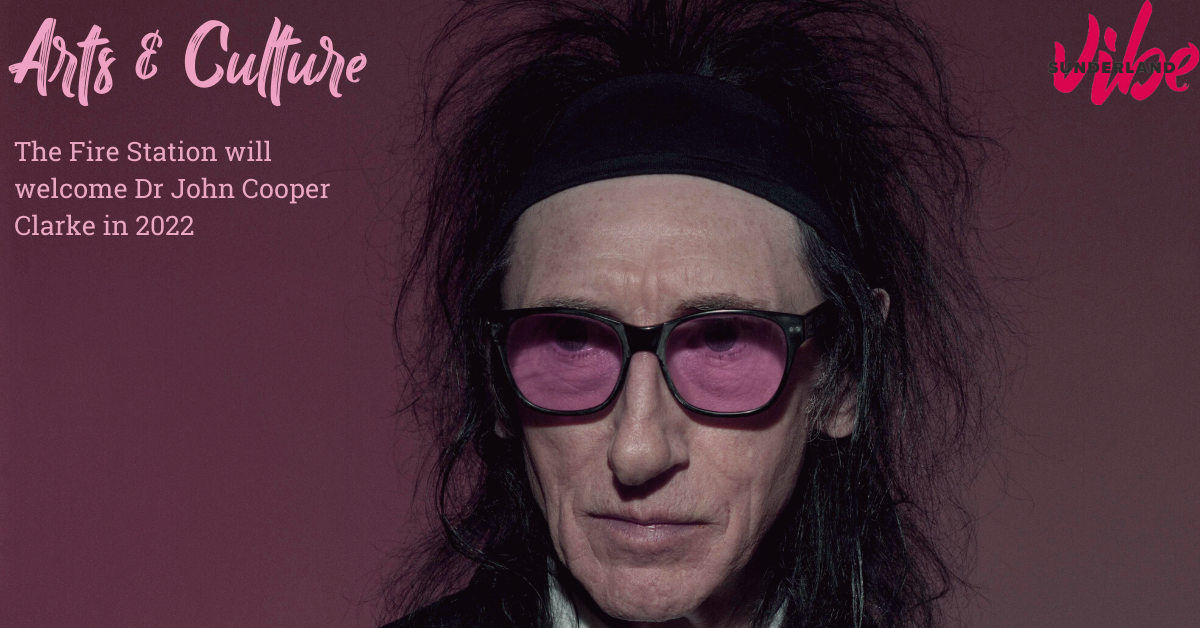 The Fire Station continues to attract big names to the city centre, as this wonderful £18m cultural venue has just announced that Dr John Cooper Clarke is heading to Sunderland as part of his acclaimed I Wanna Be Yours tour.

Set to take place in the city centre on Sunday 17th September 2022, His latest show, touring across the UK and Europe this year, is a mix of classic verse, extraordinary new material, humorous ponderings on modern life, good honest gags, riffs and chat – a chance to witness a living legend at the top of this game.

With huge shows nearing sell-out at Brighton Dome, Dublin Olympia and Exeter Corn Exchange, JCC’s show in Sunderland is certain to attract the masses given it’s his first appearance on Wearside.

Cooper Clarke is known for his signature rapid-fire verbal delivery and a capella nuances that contain stinging social commentary on topics such as Britain’s class system, politics and drug addiction.

His latest show, touring across the UK and Europe this year, is set to feature a mix of classic verse, extraordinary new material, humorous ponderings on modern life, good honest gags, riffs and chat – a chance to witness a living legend at the top of this game.

The Mancunian is heading out on tour with rising author Mike Garry. A librarian for 15 years before becoming a poet, Mike’s gritty poetry and stark words have won admiration from afar and has enjoyed successful collaborations with Joe Duddell and New Order.

I Wanna Be Yours live at The Fire Station

Born in Salford, Cooper Clarke used to work as a lab technician at Salford Technical College and has been widely credited with influencing artists ranging from the Arctic Monkeys to Bill Bailey.

Undoubtedly one of the UK’s original punk raconteurs, JCC shot to prominence in the 1970s as the original ‘people’s poet’ and from there, has gone on to headline shows at Alexandra Palace, received an honorary doctorate from the University of Salford in 2013 and released his own autobiographical film, Evidently John Cooper Clarke.

JCC’s early live shows were renowned occasions. He headlined gigs with support from many superstars such as Joy Division, New Order and Duran Duran.

He himself featured as a special guest on many shows by the Sex Pistols, Buzzcocks and The Clash, as well as carving his own unique niche as a stand-up poet across Manchester’s folk venues.

His first poetry collection, 10 Years in An Open Necked Shirt. came out in the early 80s on

Random House and featured lyrics to classic tracks from his albums and more original material. To this day, it is still one of the biggest selling poetry books ever in the UK, Canada and Australasia.

Final tickets for Dr John Cooper Clarke at The Fire Station range from £19.80 up to £27.50 (this is excluding any booking fees and so on) and can be purchased here.

It’s never too late to lift your career